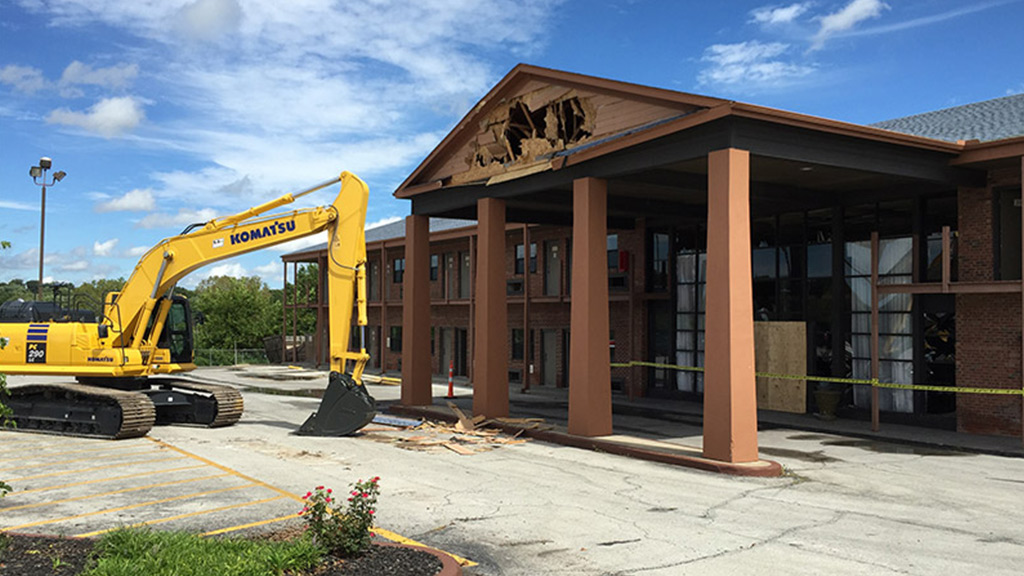 Yaeger Architecture, Inc. is excited to be involved in two urban redevelopment retail projects. Yaeger will serve as Architect of Record for façade renovations and ADA upgrades as part of a $35 million redevelopment and expansion of the MarketPlace Shopping Center in Independence. The 18-month project will include the renovation of the facades of an existing strip shopping center, including an upgrade of facades for Price Chopper as an anchor grocery tenant.  To kick off the project, on September 9, demolition began on the American Inn at the intersection of Noland Road and I-70 to make way for additional development. Attending the demolition were Carl Yaeger, Patrick Lenahan and Jay Watters from Yaeger Architecture, Inc.,  Matt Dennis from RH Johnson, Augie Huber and Tyler Ramaekers from A.L. Huber, Corey Pitts and Aspen Rapp from New Quest, Alan Johnson from Price Chopper, and Mayor of the City of Independence, Eileen Weir.

Truman’s Marketplace in Grandview, MO is substantially completed and held its Grand Opening on Saturday, September 10. Yaeger Architecture, Inc. provided design services for the redevelopment of the 540,000 sf, 50 year old center, which was formerly known as Truman Corners Shopping Center, and which is located on what was once the boyhood farm of Harry S. Truman. The project included remodeled facades and other upgrades to the center, whose tenants include Price Chopper, Burlington, Petco, Topsy’s, Five Below, Ross Dress for Less and T.J. Maxx.